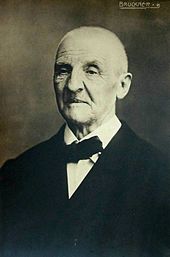 Nearly 120 years after Anton Bruckner's death, his music still polarizes people in absolute extremes. Some really hate his long symphonies and they don't see any sense in his long musical lines. However, others adore it. This intense polarization is probably one of the reasons of his success.

Even more interesting is the process of Bruckner's popularity. Most of his life time, his music was mainly ignored, while others like Brahms were in the sunshine of the music society of the late 19th century. Bruckner was fighting for many years against the attacks against his personality and his music. Hence, Bruckner had to pay himself for getting some of his symphonies performed. Often conductors reorganized his symphony, took out areas or even worse, reorchestrated it according the conservative taste of that time. His scholars, the Schalk brothers, even dared to rewrite his symphonies, and hence attacked indirectly Bruckner's self esteem.

It is just about 80 years ago, that a small change happened. One was looking after the original unchanged scores of Bruckner's symphonies. As deeper one has looked into the matter, it turned out to be rather a difficult task. Due to the lots of criticism Bruckner had to suffer, he tried to improve his symphonies and modified them to get versions that should easier been understood. In some cases he wrote even fully new movements by replacing the old ones. Some symphonies have up to three versions, each one appearing in a different light. It is often not clear, if the last version was the final version or if it was a new way to see it. Today we classify therefore the symphony version by the year of their finalization.

The interpretation of his symphonies by conductors even complicates the situation as the styles of interpretation can change dramatically. Often conductors loose the overview, end up in timing problems that causes huge abrupt breaks in the flow of music. Some even think that this is pure Bruckner style. Only during the last 10 years a new way of understanding Bruckner's music is awakening. Following strictly the commands of the score and choose beats been related to each other, Bruckner's huge dimensions in his symphonies become visible.
Eingestellt von Bruckner Insiders um 11:01:00