Bruckner and the women 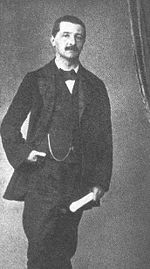 Anton Bruckner was never married and had no children. There are many stories about his contact attempts to women, his several marriage offers, but all were refused, except one that he finally refused. Till today, there are many discussions about his private life. What we know today appears to be rather bizarre. His tendency to especially young woman is notably a delicate issue that remained through all his life. His expectations were quite high and he focused on woman way too attractive and not matching to his own attractive appearance. Today the research can be quite confident about the fact that Bruckner had never been with a woman together.

There is one obscure story about him: At a time when Bruckner was leading a chorus, the group was meeting in a pub after the rehearsal. The musicians new about Bruckner's complex and convinced the waitress to seduce Bruckner. She was so successful that they ended up in a room. But what one might have thought, Bruckner started to pray and finally run out of the room. A typical behavior of Bruckner. In his world he had to marry the woman first.

What could be the psychological reasons of his complex? Was it the strong religious education? One can be quite confident that at least during his early life, he was strongly believing. Was it the time among the monks who had neglected the very human way of living? Did this maybe prevented to get experiences in his adolescent time, which would be important for developing later and mature relationships? Is the absence of this experience the reason for his preference of young women? Today, we can only speculate and asume that the answer might be found within these questions.

During his later life, Bruckner became quite overweight, that certainly was not helpful to finally find the woman of desire. He obviously replaced his unfulfilled desire by another.

Did his personal situation of unfulfilled love had an influence on his work as composer? From the nature of music, we cannot find any direct hint, that would allow such a conclusion. Psychoanalysis was first time mentioned by Sigmund Freud in the year of Bruckner's death 1896 and started a revolution of the understanding of the human mind and behavior. Today, we are familiar with displacement activity that may appear in spontaneous behavior or as long rage behavior by a lasting trigger. It may end up to obsessive-compulsive disorder on a non resolving inner conflict. Bruckner developed in the middle of his live a counting obsessive-compulsive disorder, that became so strong, that he ended up in a sanatorium. This deep crises had a huge influence for his later life. His counting obsession can be found in many aspects in his music, either in bar periods or repeating motives. Therefore we can assume, that we would not had Bruckner's music in the way it developed, if Bruckner would have been happily married, being distracted by a family life or the need to take care of others or for living. His life as single provided him with much time for his development as musician and to substitute his unfulfilled wishes into the highest intellectual form of music art with a huge emotional component. Bruckner was so far out of the normal life and hence also from the music styles at that time, that he was free of these limitations and could develop a fully unique style of music.

The last woman in his life was his female housekeeper Kathi Kachelmayer who took care of Bruckner till his last moments.