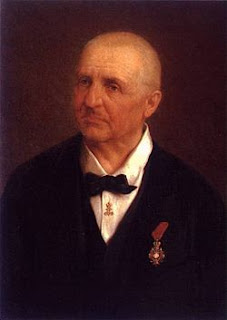 Intellectual giftedness comes with two sides: The exceptional mind and the social problem. This problem is not easy to be understood for most non-gifted people. All humans suffer one problem: Projection. For non-psychologist it can be explained as the phenomenon that all humans project their emotions, thinking, and expectations upon other people, animals, or even objects by thinking that the other will think and feel the same as well as knowing what one expects from him. I can tell you directly here, the exact opposite is the case. Everyone, who is doing this projection, knowingly or unknowingly will totally fail and suffer the frustration of his own non-realistic expectations. One of the beautiful example is when a man talks to his dog, telling him his love problems. When asked he is very confident that his dog with its brave eyes will understand him. Certainly an illusion. As long as he does not expect from the dog to help him in that problem, the illusion will keep going.

The average of people are of similar intelligence and emotionalism, so that they can try to read, what the other want from them, when the other is expressing something and of course does his projection. It is easier for the two because of the same level of communication. The interpretation of the expression of the other however happens with their own projection. Both might struggle a bit until each gets what he wants and if not, they start fighting. Human mankind somehow works and has successfully survived, which indicates that this mechanism is sufficiently successful in many cases. However, lots of conflicts proof that the ability of understanding is way apart perfectionism. Here the above described problem is the main reason, why fights and wars happen rather than meeting in peace.

What if the emotional sense and the intellectual thinking is 100 times more intense than of an average person? What will be the consequences of the communication of the two? Will it be a balanced or rather one sided communication? Well, the answer is clear: The one with higher intellect and finer senses will much easier read the expressions of the average person, he even will feel it to be quite easy and primitive to read the other, if not boring because of that. Due to his finer senses, the gifted person will try to fulfill the wishes of the average person more easily, trying to avoid further trouble and to get rid of the problem as quickly as possible. He is therefore much more flexible and adaptive, that might be experienced as a weakness by the average person.

How does the average person think of the gifted one? For him the other is not easy to read and his being is more mysterious in the lucky case for the gifted one. However, most average people will say that this one "is complicated" to declassify his personality as they subconsciously feel to be inferior. It is one of the very typical human aspects of hierarchical thinking always wanting to be superior. Those who feel to be inferior will use techniques to become superior of the other. If their intellect is not sufficient, they will use emotional games that block the gifted one to use his full capacity. Today we call this method mobbing, which can be very successful. The adaptability of the gifted person, that will be seen as weakness rather than an useful advantage, will become the starting point of attack. If the gifted person is not aware of these mechanisms, he will end up in the hand of bad people.


When we read Bruckner's letters today, we cannot ignore his very submissive style of writing. Either consciously or subconsciously he is turning his personality far below the addressee. Did he fear to show his intellect and personality to give the addressee a superior feeling in the hope to achieve his goals? Or did he just try to adapt to the level of the addressee? Would he have been successfully reached his goals if he would have shown his real personality? Wouldn't the envy of others then destroy his future?
In my impression, Bruckner must have had negative experiences with people from his early childhood. Even being primus in St. Florian must have caused envy by his classmates. At his first position as assistant teacher in a small village, the local teacher was treating him badly and was mobbing him. It was obvious: Bruckner's intelligence was a danger to the teacher's position.

One specialty of Bruckner were ironic comments for which he used the local Austrian dialect. However, for all important statements he used high standard German. Yet, this difference in expression has not much been realized by historians. A man wanted to know, what was the idea of a passage of Bruckner's symphony, Bruckner said in Austrian dialect: "Here I have looked deeply into the eyes of a young woman." The man, who had asked, because he didn't understand the music, was pleased with the answer. Bruckner had talked to him in his intellectual level. Bruckner itself had peace from further questions and maybe some fun.

During Bruckner's lecture, he also used the two language styles, creating a nice atmosphere with Austrian dialect, however, by important subjects he switch to high standard German. The comedian versus the intellectual. This controversy is typical for Bruckner. Certainly, he had a great humor, even if others might have not understood it. 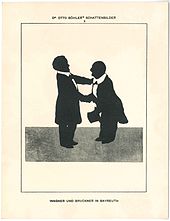 Bruckner's behavior was very respectfully when meeting Richard Wagner, whom he admired a lot. Wagner was due to his success much more confident. A silhouette illustrates very well the difference of the two. Bruckner offered Wagner to dedicate him one of his symphonies. Sitting in an evening together with Wagner, the composer of "Der Ring des Nibelungen" selected the D moll symphony, "where the trumpet starts the theme" (3rd). The next morning, Bruckner had forgotten it, ask Wagner again and he reminded him on this symphony.

From his hotel room he wrote Wagner again just to be really sure: "Symphony in d-moll where the trumpet begins? Anton Bruckner" Wagner wrote on the same letter "Yes, yes, kind regards. Richard Wagner" and returned it to Bruckner. It is the only document with the signature of the two geniuses. Interestingly this small story tells much about the differences of the both personalities although of similar intelligence. One is very self-confident, the other driven by doubts. Obviously the conditioned self-confidence in early childhood has a huge influence in the later life. A general personality factor might be responsible as well.


The conflict between Brahms and Bruckner is legendary. Brahms had a huge success with his symphonies, while Bruckner was fighting for his works to be performed, even had to pay the musicians by himself. In some concerts the audience run part by part out of the concert. Conductors send him back the score, telling him, they do not understand it. Bruckner was down and ended up in doubts. The reviewer Eduard Hanslick wrote very bad articles against Bruckner, who suffered a lot about. All this doubts accumulated so much, that had driven Bruckner to change and revise his symphonies so that of some we have today 4 versions. Nevertheless, Bruckner's intellect didn't surrender, although his emotional side got damaged. This inner conflict is not rare among intellectually gifted people.

Today we know that also Brahms had the strings of the music society in his hands that he cleverly pulled to eliminate concurrence. Bruckner was a dangerous concurrent as he was the greater genius and his music was directing into the future, while Brahms' was oriented to the past. Brahms was convinced that Bruckner's music was all swindle and that it would be soon forgotten. Interestingly Bruckner's scores have been found in Brhams's estate. It is also known that Brahms was sitting in the audience of the performance of Bruckner's Symphony No. 8. People reported that he was leaving the concert at the end with a pale face without comment. Brahms didn't stop to attack Bruckner: "He is a poor crazy man, whom the priests of St. Florian have him on the conscience." A typical mobbing case, giving a clear hint that Bruckner was a problem for Brahms. In the contrary, Bruckner took it more elegant: "He is the Brahms, respect! - I am the Bruckner, but like my stuff more." Although this, Brahms was found hiding behind a column during Bruckner's funeral, bitterly crying. At the end, a secret admirer.

Although all of this complexes and insecurities, Bruckner knew exactly what was his position and meaning in music history. He was saying: "Oh you can change my symphonies as you like as long as they get performed. However, for the Austrian music library you must leave them unchanged for later times when my music will be understood." Bruckner was a genius with an amazing mind and farsightedness, way above the people of his time, but hiding it most of the time.