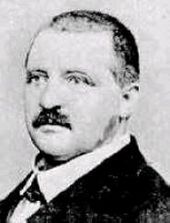 Bruckner grew up in very poor conditions. His father was a teacher, who barely could support his family. After the death of his father, Bruckner had been brought to church to receive an education there. After some odyssey he finally returned to St. Forian, the place that had the greatest influence in him as a place of inspiration, developing his taste for arts and music. In his later life, Bruckner returned regularly to St. Forian where he also got coffined.

His poor conditions at childhood did not allow him to receive an academic education in music, something that would have opened him the door to the higher society. Lifelong he suffered on the fact, not to be accepted for his music in the academic society, even though he got in his later life period an academic teaching position.

Brahms, the one in the sunshine of the music society, was very much admired especially in Vienna, because his music matched the music conventions of that time as best. Bruckner's revolutionary ideas in music shocked many people, who were unable to understand this music intellectually.  This often resulted in total rejection of Bruckner's music, some considered him crazy, others being a farmer. Also his inability to adapt himself to the clothing style of the higher society enforced his problem of acceptance.

Although all of this attacks upon his personality and music, he knew exactly the importance of his music in respective to the music history. Only a few comments indicate it. His awareness about himself is in huge contrast to his shy and often submissive behavior, that certainly has its roots in the permanent attacks against him. One should also note that such geniuses are extremely sensitive, having developed more senses than average people, who consider the smart people as crazy, because they simply do not understand them. Today we know this phenomenon of high talented children.

Bruckner developed methods to deal with the situation, often not to be understood. One typical behavior was to speak in local dialect, when he made ironic fun in situations of ignorant people, who of course didn't realize it and took it serious. However, at important situations he used the high standard German, a fact that has not been discussed much in music history yet. It would rather need a psychologist than a music historian to start to understand Bruckner's life.