Bruckner, the organist and a decision with consequences 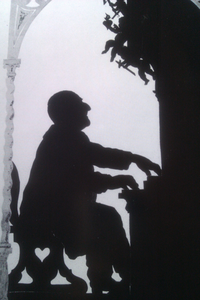 At the age of 13 years Bruckner came as choirboy to St. Florian to continue his school education by the catholic church due to the death of his father and due to the poverty of his mother. St. Florian was a cultural center for hundreds of years and apart from religion was also teaching music. Bruckner had lessons in singing, violin, piano, and organ. His interest playing organ grew after his voice changed at the age of 15 years, Bruckner became the assistance of the organist Kattinger, who was his teacher and he admired his improvisations, something that had a great impact on Bruckner's future. Part by part Bruckner learned to play first  on smaller organs and finally the great Baroque organ of St. Florian, one of the largest organs in Austria.

During a preparation course, "Präparandenkurs", that he started in 1840, he got also introduced to Johann August Dürrnberger, a music teacher and an important figure as music researcher. Dürrnberger's elementary book in music  had huge influence on Bruckner's music education. Bruckner got introduced to the music of the famous composers Haydn and Mozart.

In 1851 he became organist of St. Florian. A period with daubs followed, creating the first internal crisis. Bruckner at the age of 30 was still not married and suffered again not replied love, an issue that accompanied him through all his life. Maybe this unfulfilled part in his life, was his inner driving force for creativity. His carefulness and shyness might have been a result of a difficult childhood due to the early loss of his father and as consequence of loss of family at the age of 13 years. This is especially tragic  during the developments in puberty. Who knows, maybe we would not have had the grand composer Bruckner, if he had a normal life and if he would be married at the age of 25 years, busy with growing up children and support them.

In 1955 Bruckner applied as organist of Linz cathedral. Bruckner hesitates, but with support of friends, he finally accepted. He became famous for his free organ improvisations and he had secret admirers.

Bruckner reached his peak in playing organ in 1871, when he go the opportunity to play in London at famous places such as the Royal Albert hall and later at Crystal Palace. 6000 people came to the fist concert at the Royal Albert hall and two more concerts followed therein. Bruckner got invited to play in Crystal Palace. An audience of 70,000 people listen to Bruckner. A gigantic number that has only been reached again today at pop concerts. The size of Crystal Palace was breath taking, uniquely been build for the world exhibition and constructed out of steel and glass.

Bruckner's success was overwhelming and it was too much for him to cope with it. He was unable to deal with the sudden popularity. Even worse, he refused the opportunity of a concert tour in England that would have brought him within six months an income of 100 yearly salaries as music conservator teacher. Bruckner could have been independent as composer, however, he was unable to use unique opportunity. It is a riddle why he refused it and we can only think of the local people problem, that could explain it, not to see ahead the familiar life and to be too afraid to go out into the world, being drawn back by homesickness.

Maybe another part played an important role for this decision: His focus on composition. Bruckner had a limited organ repertoire and was not willing to extend it. When asked to play other works from Bach, Bruckner said: "Better ask my scholar, he can train it."